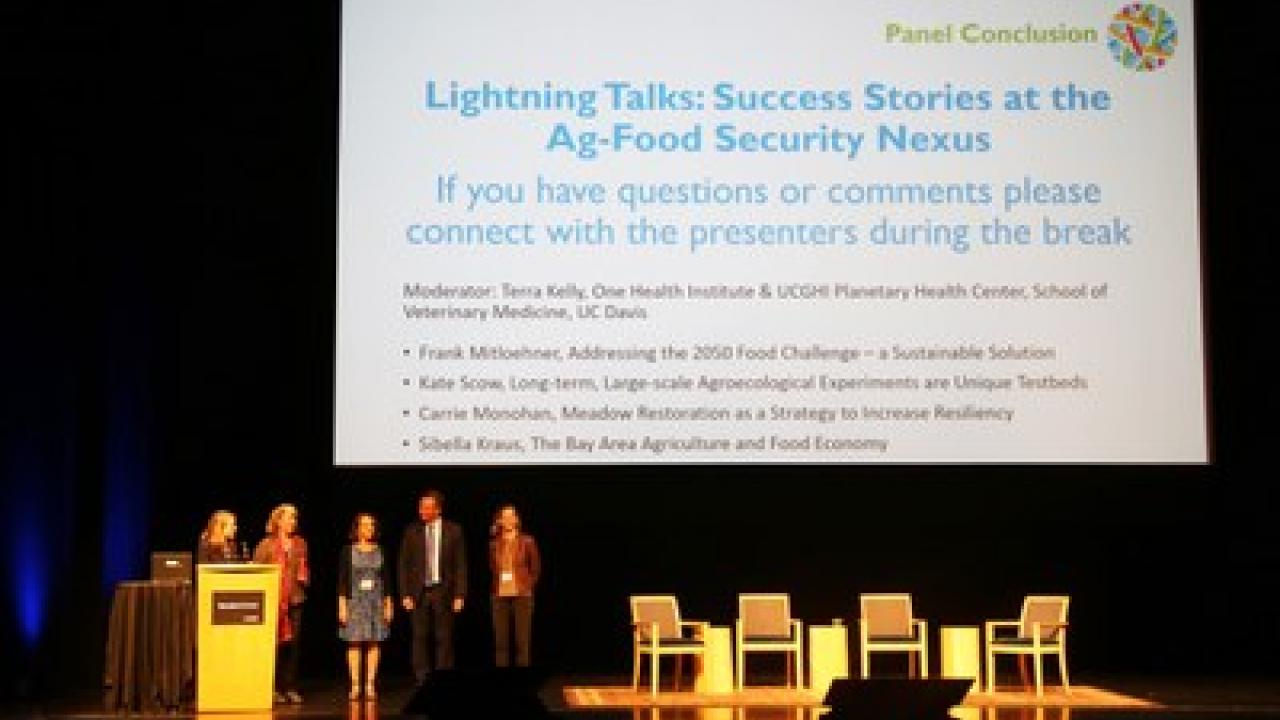 Organized by the California Department of Conservation and University of California, Davis, the symposium "Managing Lands in a Changing Climate to Improve Agricultural Resilience, Food Security and Health" served as an affiliate event to the Governor's "Global Climate Action Summit." The event brought together hundreds of folks across various disciplines for a day full of engaging talks and break out workshops. ASI's very own, Kate Scow, provided a timely report of the ways UC Davis'  Russell Ranch is seeking to understand the real impacts of agricultural management on resource use, economics, and the environment in the long term through the Century Experiment (http://asi.ucdavis.edu/programs/rr/about/century-experiment).

There is value in long term research experiments for investigating climate change in agricultural systems.

I first learned of long term experiments when I visited Rothamsted in Great Britain, where in 1843 Lawes and Gilbert set up small field plots to compare effects of different fertilizers on turnip yields. These plots, still on-going, together with other experiments there, have been the foundation of our knowledge of soil fertility, ag statistics and more recently impact of climate on ag. It is important to say that most ag field studies are 2-3 years long because of short funding cycles. Long term experiments are few and far between.

We are fortunate to have a long term agricultural experiment at UC Davis- The Russell Ranch Sustainable Agriculture Facility, started in 1992 is the only long-term experiment in a Mediterranean climate--a climate particularly vulnerable to predicted swings in temperature and precipitation and the source of much of the world’s fruits and vegetables. RR has just reached our 25th anniversary!! Young but starting to yield important results. 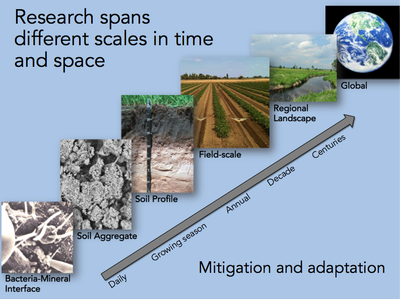 It is in this space where we can look at mechanisms and impacts at different scales--pore scale where microbes and minerals and organic amendments conspire to build soil organic matter; field scale--more the human scale, where we measure crop yield and quality, and efficacy of climate-smart practices; global scale where we see the culmination of choices we make on the ground.

We study climate mitigation--trying to slow the process of climate change---and adaptation--finding ways to reduce vulnerability to climate change. By we, I refer to scientists from across campus and from universities and institutes throughout the world. I will give one example of each type of research.

Sequestration of carbon in soil as organic matter can remove CO2 from atmosphere, is sensitive to agricultural management practices, and ultimately could help slow global warming.  We measured soil carbon at depths down to 2 meters (very rare) after 20 years of different management practices. We found adding compost and cover crops (crops grown  to sacrifice to the soil) increased soil C by >12%, which is a higher rate than promoted in the 4 per thousand initiative launched in France in 2015. Growing only cover crops sequestered far less, only 3.5%, primarily in the surface soil, not deep in the soil where C is better protected. We are studying the mechanisms involved and particularly the soil microbial communities who drive C sequestration.

As the availability of water becomes less predictable we are exploring how to get more crop per drop and use water more efficiently. We’ve found we can reduce irrigation of processing tomatoes by 40-50% in late season and get the same yields and sometimes better quality. Drip irrigation helps make this possible.   BUT water efficiency usually focuses on crop and not other ecosystem services. Drip irrigation delivers water right where the plant roots are but leaves the rest of the soil bone dry. Many other soil processes require water--nutrient cycling, decomposition, soil structure, C sequestration. We are studying and evaluating the significance of these potential tradeoffs. 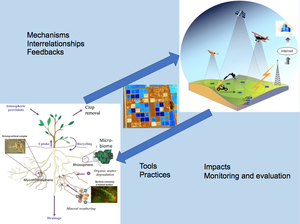 ii) Testing new crops that will thrive in a future climate--e.g., Kernza, the perennial grain.

Measuring variability in crop yields and their relation to changes in climate. 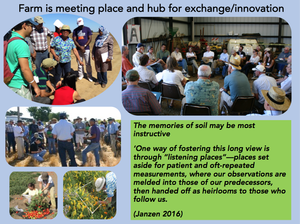 At Russell Ranch we know research on climate change is not just about biology, chemistry and physics, not just about technological advances.  The social dimension is just as important. Science produces lots of good seemingly ideas that are never adopted for good reasons: context wrong, didn’t consider user, too expensive. Farmers and other stakeholders must be involved, ideally from the start, in a continuous conversation and as discoveries are made to guide future directions and help understand what emerges. RR provides a meeting place, amidst its fertile fields for discovery and finding solutions, to have these important conversations.

Life Underground: Partnering with Soil Microbial Communities on the Farm