The Inter-institutional Network for Food, Agriculture and Sustainability (INFAS) is a national network of university and college educators, researchers, and activists, representing 26 institutions and spanning 20 states, who collaborate in analysis, synthesis, and problem-solving with practitioners to increase U.S. food-system resilience; to illuminate critical trends and common stewardship of public goods essential for food systems, such as water, biodiversity, ecosystem services, and public institutions; and to reduce inequity and vulnerability in the U.S. food system.

Read the INFAS statement on Equity in the Food System 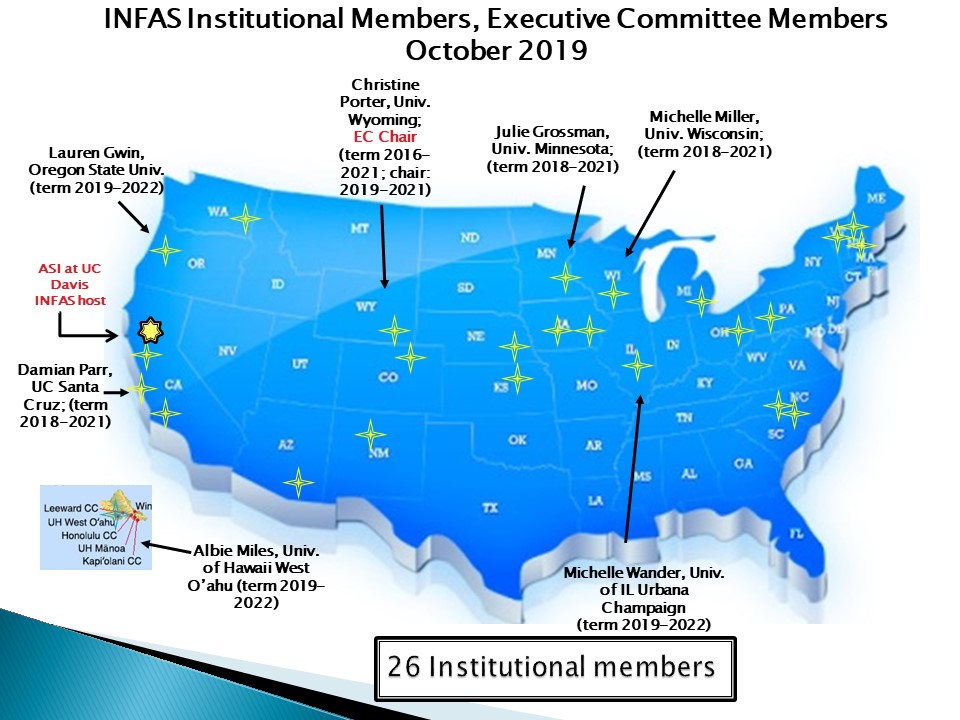 Additional text from INFAS members or from additional institutions, not currently in the INFAS network

(1) MSU additional text:  See the map on this link for Michigan’s state boundaries that were formed in several land treaties that include Michigan State University.

(2) UW additional text: Please acknowledge with us that this University is situated upon traditional territories. The Hooçak Nation calls this region home and this place where we are meeting is known as Dejope. Villagers and their agricultural fields thrived along the banks of these lakes, along the Wisconsin, Rock, Illinois, Fox, Baraboo, Trempealeau, LaCrosse, and Black Rivers and all their tributaries. After the War of 1812, the United States, acting through a citizen paramilitary, removed Hooçak people and resettled the area without the Hooçak Nation’s consent. This resulted in the 1825 Treaty of Peace, where the US government recognized the Hooçak Nation and its sovereignty over 10.5 million acres of land in what is now southern Wisconsin and northern Illinois. The treaty also promised that these lands would not be entered without the Nation’s permission. The Black Hawk War of 1832 led to the 1832 and 1837 treaties signed for the land upon which this University is built, first ceding title to 6.8 million acres, and then all of their territory to the US government. We recognize the enduring presence and territorial claim of Aboriginal peoples on this land.

For 170 years, the UW campus has been a catalyst for social change. It is the state’s public land grant university, charged with solving real-world problems. The Wisconsin Idea – that citizens, state government and the University work together to address the issues of our day – is deeply embedded in campus culture, and throughout the state by University of Wisconsin Extension and college campuses in the UW System. The 936-acre Madison campus is a city-within-a-city of more than 43,000 students and 10,000 employees. It is blocks away from the State Capitol on the isthmus between Lake Mendota (in the Hooocąk (Ho-Chunk) language: Wąkšik homįkra, meaning “[where] the man lies”) and Lake Monona (in Hoocąk: Ciihabokiǧackera, translating to “the teepee lake”). This is Hoocąk territory, and one can find evidence of pre-European ceremonial mounds, agriculture and village sites throughout the isthmus, as well as a contemporary Hoocąk presence. A tour exploring Hoocąk territory is offered on Wednesday, and the Friday night festivities will be held in DeJope Hall (in Hoocąk, Dejope is written as Teejoop and is used to refer to the place of the four lakes, or the contemporary Madison area).

(3) University of Missouri, Columbia (contributed by Dr. Sarah Lovell): I would like to begin with a land acknowledgement – a statement that recognizes and honors Indigenous Peoples as traditional stewards of the land. The Ozark region had an important history prior to European colonization. Even as early as 12,000 BC, this land was used for hunting and camping by early Paleo-Indians. More recently, the Osage and other tribes migrated across the area to inhabit the land that is now known as Missouri. They remained here for 1300 years, until the land cessions in the early 1800s. The landscapes of the region hold this legacy in trails, hunting camps, and sacred burial grounds. We are grateful to the Native elders, both past and present, for their hospitality and willingness to share an ethic for the stewardship of the land.

The Agricultural Sustainability Institute at UC Davis is the hosting Institution for INFAS.  The network coordinator, Joanna Friesner, is the main contact for all INFAS activities.