Mountjoy is being honored for his leadership in promoting practices and approaches that enable farmers and ranchers to be stewards of the environment. Mountjoy will receive this prestigious award at a ceremony at 5 p.m. on April 27 at the UC Davis Conference Center. The event will also feature a presentation by local farm-to-fork pioneer Patrick Mulvaney, chef and owner of Mulvaney’s B&L restaurant in Sacramento.

The Bradford Rominger award recognizes individuals who exhibit the leadership, work ethic, and integrity epitomized by the late Eric Bradford, a livestock geneticist who gave 50 years of service to UC Davis, and the late Charlie Rominger, a fifth-generation Yolo County farmer and land preservationist.

“He displays the courage to step outside of conventional thinking,” Bianchi explained.

At the Natural Resources Conservation Service, Mountjoy led an award-winning conservation outreach program for the farmers who work the marginal land surrounding Elkhorn Slough. Mountjoy found that despite interest from farmers in starting restoration projects on their land, the lengthy permit application process to get their projects off the ground presented a major stumbling block.

“All of the environmental laws were written to protect the environment, and yet the unintended consequence of many of them has been that they actually slow decision making to the point that farmers don’t want to participate,” Mountjoy said. 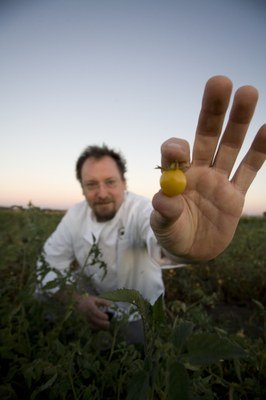 At the ceremony on April 27, Patrick Mulvaney, owner of Mulvaney’s B&L restaurant in Sacramento and Farm to Fork pioneer in Sacramento, will speak on  “Leading from the Back of the House: Reflecting on Mastery for Service."

This event is free and open to the public. Students are the primary audience, as the next generation of sustainability leaders, and are encouraged to attend. Learn more about the Bradford Rominger award here.