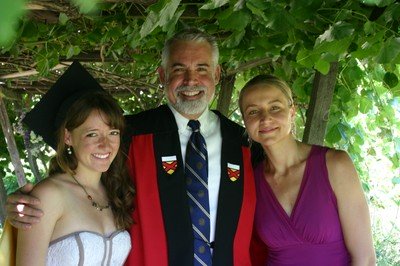 On Sunday morning, June 17, thousands of students marched through UC Davis' campus in caps and gowns to receive their diplomas.  That afternoon, we gathered at the Ecological Garden to celebrate with Genna Lipari and Alannah Kull, the two students who make up the first graduating class of the Sustainable Agriculture and Food Systems Major (SA&FS).

The SA&FS major, officially launched at the beginning of the 2011-2012 school year, integrates multiple subjects to provide students with a thorough understanding of the many issues facing modern farming and food systems, including production, processing, distribution, consumption and waste management.

The degree was created with the goal of instilling in students the ability to step back and see the big picture, said Professor Ryan Galt, who teaches a core course in the major.

For Genna Lipari, that goal was met.  "I'm well positioned," she said.  "I think I get the big picture a little better than most [new graduates].  It's a valuable perspective to have in the work force."

We want to congratulate Genna and Alannah on their accomplishment, and wish them the best of luck as they head out into the work force.  New students are frequently showing interest in the SA&FS major, so we look forward to future graduation ceremonies and the chance to celebrate the work of our students.