Drip irrigation was the topic of conversation at this year’s Russell Ranch Field Day growers panel – and opinions were mixed. 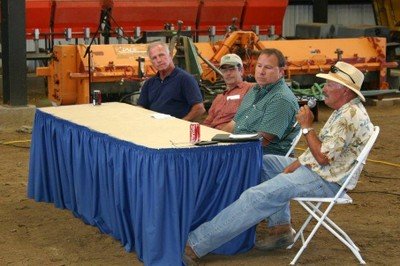 John Meek (JH Meek and Sons) has been using drip on a portion of his crops for three years now. For Meek, the pros of drip include higher yields and the opportunity to grow tomatoes on land that otherwise wouldn’t support them. Initially, he saw lower labor costs, but in the second and third years he began seeing higher labor costs as much of his drip tape needed patching.

Rick Martinez, a grower from Davis, said that after having difficulty on his South Davis farm with furrow irrigation, he’s seen much better yields with drip, and is paying less for labor because there’s no need to open and close ditches as there is with furrow.

Both Meek and Martinez said they’re also using less herbicide because drip irrigation has helped them to control weeds.

Scott Park’s (Park Farming Organics) experience with drip was problematic. He’s no longer using it because of several major problems that he encountered. One was pest damage. With gophers in his fields acquiring a taste for a “plastic diet,” he spent more on labor to fix leaks in his tape. He also had a problem with algae and mineral build up in the tape and needed to flush the system once a week to keep his lines clean.

For Park, another problem was the inability of drip to contribute to his philosophy of overall soil health. Park said that drip limits the amount of irrigated soil that the plant can access – restricting each root system to a reduced moistened soil profile. With irrigation limited to this narrow area, Park said that the rest of the field can dry out, resulting in less healthy soil.

If you’d like to learn more about drip irrigation, UC Cooperative Extension Specialist Tim Hartz recommends this article (on drip in processing tomatoes) as an introduction.