There's a problem with our current use of nitrogen in agricultural systems: we're inefficient. That's the message Ken Cassman, Heuermann professor of agronomy at the University of Nebraska-Lincoln, gave to a crowd of UC Davis professors and students last week. 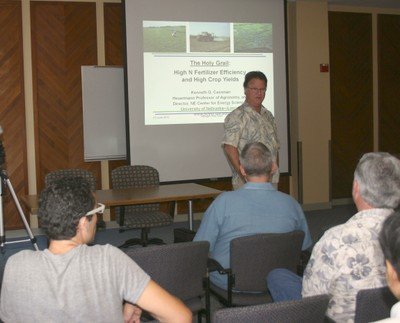 Cassman, who was visiting Davis as part of the "Experts of Nitrogen" speaker series, a project of the California Nitrogen Assessment, credited nitrogen fertilizer and the Green Revolution with providing food for about a third of today's existing population -- without these advances, we would have much less food, and likely, many fewer people.

However, Cassman said that even with these gains in productivity, farming systems still waste at least 20 percent of the nitrogen they apply to fields, possibly more in some cropping systems. And plants don't efficiently take up all the fertilizer that is fed to them. This leads to yields that are lower than optimal as well as significant pollution problems.

Cassman's challenged the group of agricultural experts he spoke with to solve this problem. In future years, we will need to increase productivity to feed growing populations. Without transitioning additional area into farmland, the only way to increase yield is to become more efficient and waste less fertilizer.

First, Cassman laid out the research and practices pathways that he believes probably won't lead to this result. He dismissed improvements in genetic traits of plants, saying that there's not much one can do on a genetic level to increase nitrogen uptake efficiency in plants. He also discounted simulation models that help predict indigenous N supply in soil, and organic agriculture, because of land and water availability constraints.

Cassman placed his best bets, instead, on three developments. The first is improvements in timing of fertilizer application, so farmers are actually applying fertilizer when the plant will be most efficient in taking it up. This could have a huge impact on efficiency and reduce loss of nitrogen.

And thirdly, crop yields could be improved overall by creating plants and systems that have more rapid early vigor and get less disease and insect damage, which affect yields, Cassman said.