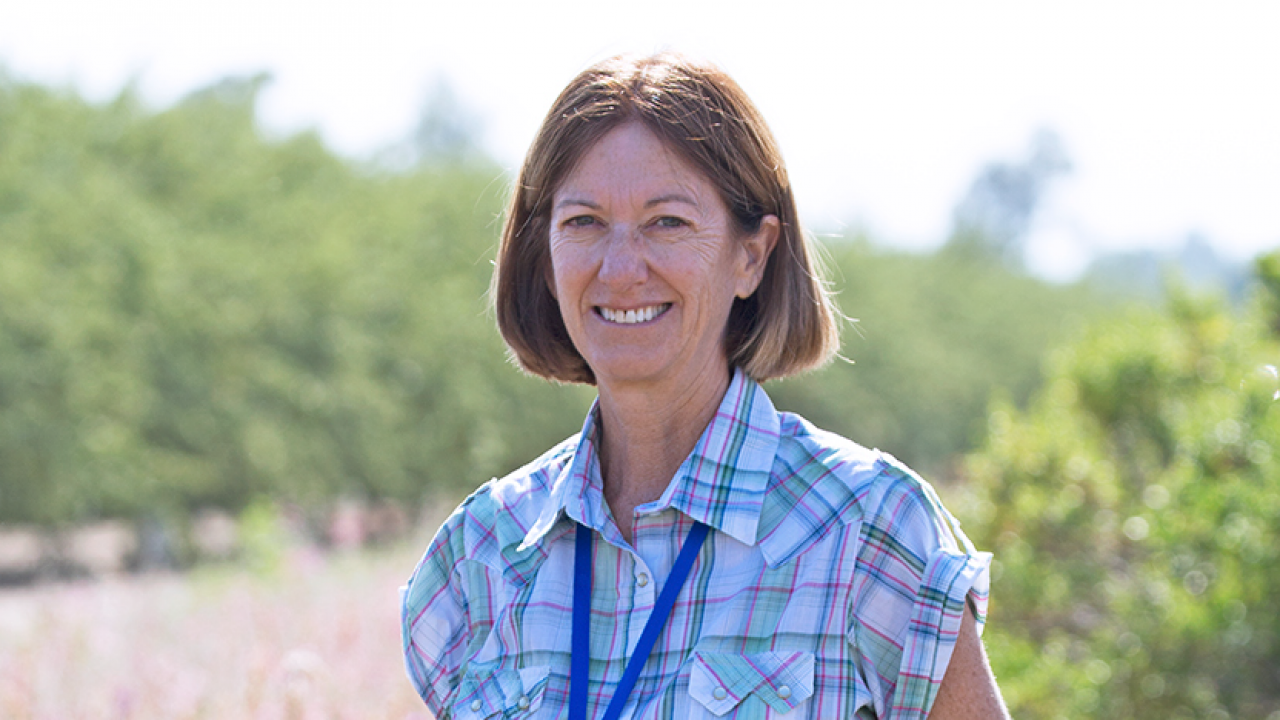 Rachael Freeman Long treasures her memories as a graduate student in entomology at the University of California, Davis.

"Wow! Cool!" she thought as the wasp parasitized the aphids.

Rachael went on to receive her master's degree in entomology in 1987 (studying with major professor James R. Carey); to join the UC Agriculture and Natural Resources as a UC Cooperative Extension (UCCE) farm adviser for field crops and pest management for the three-county area of Yolo, Solano and Sacramento; and to develop and share her interests in biocontrol and other topics.

And this week the UC Davis alumnus-UCCE farm adviser was named the recipient of the 2019 Bradford Rominger Agricultural Sustainability Leadership Award. She will receive the award at a presentation at 4:30 p.m., Tuesday, May 28 in the Alpha Gamma Rho Hall (AGR) room of the Walter A. Buehler Alumni Center. A reception begins at 4.

The award, established in 2008, honors individuals who exhibit the leadership, work ethic and integrity epitomized by the late Eric Bradford, a livestock geneticist who served UC Davis for 50 years, and the late Charlie Rominger, a fifth-generation Yolo County farmer and land preservationist.

The award presentation prefaces the Agricultural Sustainability Institute's Distinguished Speakers' Seminar, “Building a Better World, the Opportunity to Achieve Climate Drawdown and a Safe Future" by environmental scientist Jonathan Foley, executive director of Drawdown.  Foley, ranked by Thomas Reuters as among the top 1 percent of the most cited global scientists, will address the crowd from 5 to 6 p.m.

Rachael is a native of Berkeley and the daughter of a UC Berkeley biology professor. She received her bachelor's degree in biology from UC Berkeley.

In 1992 she accepted a position as a pest management, low input systems UCCE adviser for Yolo, Solano and Sacramento counties. This was one of the first sustainable agricultural adviser positions within UC Agriculture and Natural Resources (UC ANR), with a focus on developing programs to manage pests in field crops with minimal impacts to the environment.

When Rachael started her projects 27 years ago, her ideas were considered “way outside the box and on the fringe,” she recalled. Now her work is mainstream with the UC Integrated Pest Management Program (UC IPM) guidelines incorporating the value of habitat planting for enhancing natural enemies and pollinators on farms for better pollination and biocontrol of crop pests.

Long is known for her research and advocacy of hedgerows, her leadership in teaching others about agriculture, and her drive to mesh farming, food production, and wildlife conservation. As a result of her work, the California Healthy Soils Initiative and Natural Resource Conservation Service established cost share-funding for hedgerow establishment on farms, for pest management and carbon sequestration.

Long's research focuses on enhancing natural enemies for better biocontrol of crop pests. "Hedgerows are important for enhancing beneficial insects, including bees and natural enemies, for better biocontrol and crop pollination in adjacent field crops, with measurable economic benefits," she says. "Hedgerows can pay off after 16 years for pest control and seven ears if pollination benefits are added in for bees. Bats and birds associated with habitat likewise have economic benefits for helping to control key codling moth pests in walnut orchards."

Long, who worked closely with Charlie Rominger, commented: “I think Charlie would have been excited by this work. When I first started my job, we spent time in the field looking at field edge habitat and all the birds and beneficial insect activity and wondered about their benefits to crop production. Now we know! Lots of positive ecosystem services associated with habitat!  Eric Bradford would have likewise been impressed with work that involved 20 plus years of meticulous research work by strong teams committed to data collection, to document the benefits of field edge habitat to agriculture.”

She and her colleagues have published 14 peer-reviewed papers on hedgerow research.  Her work, with colleagues Kelly Garbach of Point Blue Conservation Science, and Lora Morandin of the Pollinator Partnership, can be summarized in their research article, "Hedgerow Benefits Align with Food Production and Sustainability Goals," published in September 2017 in California Agriculture. Her most recent paper appeared in UC ANR's special global food initiative edition of California Agriculture.

In addition to her research, Long has delivered hundreds of presentations about the importance of hedgerows on farms; conducted and published surveys on how to better reach out to the grower community to enhance the adoption of hedgerow plantings, as well as the importance of bats, birds, and raptors on farms; and has mentored many undergraduate and graduate students.

Long brings teams of researchers together to work on projects focusing on agriculture and ecosystem services, which lead to enhanced conservation on farms. In 2013, she and her colleagues received the California epartment of Pesticide Regulation IPM Innovator Award for work on hedgerows and pest management. She was also a pioneer in developing practices for protecting water quality from non-point source pollution from agricultural runoff in the early 2000s.

Long is also a children's book author of the Black Rock Desert Trilogy (three books): “Gold Fever,” “Valley of Fire” and “River of No Return,” works published by Yorkshire Publishing. They are the end result of telling stories to her son, Eugene, about an adventuresome, kind-hearted, wildlife-loving boy named Jack and three of his friends--a bat named Pinta, a coyote named Sonny and a crow named Midas. She dedicated the books to Eugene ("he heard the stories first") and her husband, David ("for always being there.") (See Bug Squad blog)

For more information regarding the event, visit here.